My roommate kindly pointed out this fantastic NYT piece about steampunk. Though I think it focuses too myopically on the commercial potential of steampunk, it does mention some mainstays in the community and says positive things about the movement overall.
Posted by Caroline at 8:45 AM No comments:

Ah, the lack of posting that occurs when the end of the semester rolls around...so tragic, and yet so predictable.

In between epic papers and exams, I have done a bit of knitting. Mostly I've been working on St. Brigid, but I also just finished a little project from some spare yarn. It's an armband/wristband with the Universal Translator symbol from Star Trek. I love doing two-colour Fair Isle knitting and this came together really quickly. 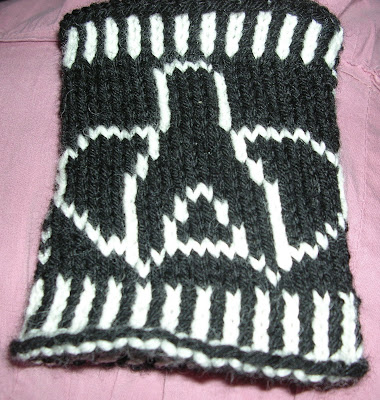 I have more Information on Ravelry...

I've also acquired yarn for a secret project and for some new socks, but they have to lie dormant until the semester has really concluded.
Posted by Caroline at 3:27 PM No comments: