Sockapalooza begins today...the matches are in! I'm delighted to receive my match...won't say anything here about the details just in case she reads this, but I hope she's looking forward to getting a pair of socks.

Now I have to choose a pattern--I'm tempted to make cabled socks because I've never tried that before. I still love varigated yarns though! We'll see.
Posted by Caroline at 6:46 PM No comments:

April is the cruellest month

Today Davidson had the privilege of hearing Tony Snow speak on the topic of liberal arts education and the importance of critical writing and thinking skills. The lecture was not planned well in advance; rather, Mr. Snow was in town this weekend for alumni events and he graciously agreed to speak to students briefly.

He gave a few brief remarks on the importance of brevity in thought and writing, but then spent the rest of the hour answering questions. Question-and-answer sessions tend to make me nervous; I’m always afraid that someone will ask a dumb question or worse, attack the speaker. Fortunately, only one student fell into the latter category. His question—one of those that last five minutes before getting to the point—seemed designed to trip up Mr. Snow and criticize some of his past action. Despite the student repeated efforts to engage Mr. Snow in his bizarre dialogue, Mr. Snow simply refused to fall for the bait.

The most surprising and pleasing element of his talk was the humorous aspect. “When people stop laughing at politicians, that’s a problem,” he said. Responding to a question about his opinion of The Daily Show, Jon Stewart, and satirical commentary, he reminded the crowd of students that laughing at yourself and at others is important and not something to avoid.

Questions ranged from asking Mr. Snow his opinion on Fox News, to how he would explain the White House’s perceived “lack off transparency.” He answered each question with style and articulation. Though I wasn’t sure whether I wanted to ask a question—I was afraid I would speak too quickly and that he wouldn’t understand—I did at last. I asked what relevance a liberal arts education had today, in light of new technologies, especially blogging. He responded about blogs first, adding more humor, but then becoming serious in his note that blogging democratized the media—now everyman and everywoman who can access the web can share an opinion. Then he addressed the liberal arts education, giving his insight that college teaches you to learn; he said he’s in the “world’s longest grad school.” I love the concept of life-long learning, and thus found his position valuable.

Overall, Tony Snow’s lecture inspired me to be more articulate in both my speech and my writing. His notes on brevity reminded me of Strunk & White’s admonition: Omit Needless Words (also one of my father’s favourite aphorisms). It was a wonderful opportunity to hear him speak and also highly entertaining.
Posted by Caroline at 8:55 PM No comments:

It's almost time for Sockapalooza 4--this is my first swap and I can't wait to get started.

Not that I need more more knitting, but I love to knit socks. I need a new portable project for carrying around and knitting during the in-between times. Hunter's blanket is now so large that it has to live in its box and doesn't travel with me very far.
Posted by Caroline at 11:16 AM No comments:

"He first, I second, without thought of rest
we climbed the dark until we reached the point
where a round opening brought in sight the blest

and beauteous shining of the Heavenly cars.
And we walked out once more beneath the Stars."

Though the Divine Comedy is one of those iconic, classic works that everyone is supposed to read during their lifetimes, I've never been assigned the work before. In the Humanities sequence, we are reading parts of the Inferno and Purgatorio, but none of the Paradiso, oddly enough.
The most interesting fact that I've learned about the Divine Comedy so far is that each of the three books end with the word "stars." Perhaps this is just the rapid Harry Potter fan in me getting excited, but I am reminded of J.K. Rowling's plan to finish the last book with the word "scar."
Posted by Caroline at 6:18 PM No comments:

What Time to Protest?

In light of the recent tragedy in Virginia, a discussion of campus safety in general has begun.

Last night on the news, following a brief coverage of the shootings, the local channel of Fox News interviewed directors of safety at UNC Charlotte, a local large university. They were asked how they would respond to a similar incident, and thus explained their alert system, the emergency call stations located around their campus, and so forth.

Students from VA Tech have also been discussing their lack of awareness of what happened after the first shooting, claiming that emails were vague and not helpful. They have been critical about how the crisis was handled.

What concerns me is this: does society not have a period of grace or mourning during which criticism is frowned upon? Can the campus not have a time to grieve before others and outside parties begin to critique their methods of handling the situation. Naturally, the students are an exception, because they are part of the campus, but nevertheless. It seems that as soon as tragedy strikes, someone is blamed for not preventing or dealing with it in a better manner.
Posted by Caroline at 4:26 PM No comments:

Rather than exclaim over my shock at how cold it is for an April day, I'll substitute by offering a personal poem. When my French class last semester centered around poetry analysis, I found it extremely challenging. Because I lack a musical ear, I struggled with hearing the syllabic breakdowns and rhythms. However, I still enjoyed penning small poems in French. This poem grew out of that experience.

when I write to you in
French
it becomes a labour
of love, of course and
of academia, of deliberation

and yet too scientific
les pieds se mêlent—
I count the syllables, weigh
The hémistiche
like the scientist
who titrates carefully
o the wonders of analytical thought!

instead,I write in
my mother tongue
whose kind nature
and comfortable contours
that familiarity and welcome

reminds me of you
Posted by Caroline at 4:59 PM No comments:

Live at the Tabernacle: The Decemberists 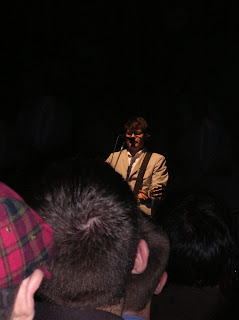 Yesterday I saw The Decemberists in concert at the Tabernacle. I’ve loved The Decemberists for a while but had never seen them in concert before. When I read their tour schedule and saw that they’d be in Atlanta Easter weekend, I knew this was my chance.
My dear friend Lauren drove the two of us to the Tabernacle with half an hour to spare. We waited impatiently while laughing at the emo haircut* that many members of the crowd, both male and female, sported. The stage was already decorated with a large backdrop of a Japanese-style landscape and large paper lanterns were hung overhead. The floor and balconies quickly filled and at 9, the opening band came onstage and played approximately seven songs. Towards the end of the set, the crowd was clearly restless. Our fellow floor-standing audience members were complaining and we all wanted The Decemberists to arrive.
At last, Colin Meloy, Chris Funk, Jenny Conlee, Nate Query, and Joen Moem came onstage. They opened with the title tracks from their latest album, The Crane Wife. Colin made excellent conversation between songs, which was delightful. Sometimes bands play songs continually, pausing only to say “Hello [name of city]” or just “We’re so glad to be here in [name of city].” A weak attempt at interaction can ruin a concert or at least make the experiences much less enjoyable. Fortunately, Colin had no trouble, cracking jokes about the rats in the parking lots (inspiring a fan to shout, “Atlanta’s rats love you too!”) and breaking into a spontaneous moonwalk. He led the crowd in a contest at the end of “16 Military Wives” to see which side could do the “la-dee-da” part better. “The Mariner’s Revenge Song” featured an accordion, a huge upright bass, crazy percussion, audience participation screams, and an impressively imposing large grey whale onstage, made of what looked to be paper-mache.
While I had most anticipated seeing Colin sing and perform, I found myself drawn to Jenny, who played the piano and keyboard (among other instruments, including the accordion). She threw herself into every song, playing with panache and passion. When she sang backup vocals or had a few parts in a song, the audience gave her the recognition she deserved.
Overall, it was a fantastic concert. We could have listened for another hour, but the set did last for an hour and a half, which was fairly long. Even if the set list looks paltry, The Decemberists tend to have quite long songs—more 8-minute epics than 3-minute radio hits.


Set list (all the songs they played, though I can’t remember the exact order):
The Crane Wife 1 & 2
The Crane Wife 3
Billy Liar
Grace Cathedral Hill
O Valencia!
The Island: ~ Come and See ~ The Landlord’s Daughter ~ You’ll Not Feel the Drowning
16 Military Wives
The Mariner’s Revenge Song
Eli, the Barrow Boy

*The emo haircut is characterized by short, choppy hair that includes fall-in-your-eyes bangs. Often accompanied by ironic small ponytails at the back of the head, its predominant color tends be black or brown. Blond streaks are permitted. Above all, the emo haircut must look slightly messy and unkempt.
Posted by Caroline at 9:44 PM 1 comment: